I think it was 1997 that I first came in contact with the work of the artist Akio Makigawa. I came across a lone sculpture. 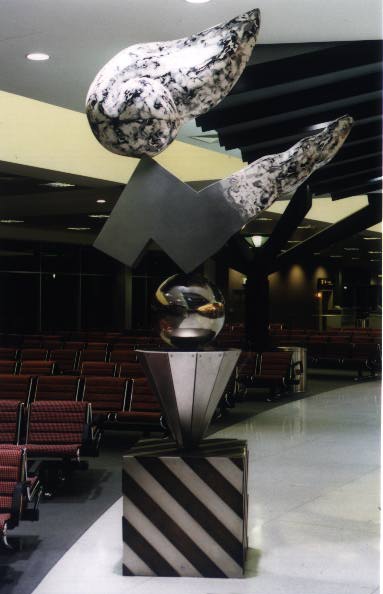 I stood and looked at it for a while as one typically does when studying a work of art. I walked around it. I looked at the whole trying to "grok" it. I looked at each of the parts. I counted them - 5. Hmm, i thought, like the first line of a haiku.

What did it mean? What was the artist trying to say?

Let's look at the parts starting with the top piece.

When it dawned on me what it was the whole sculpture then resolved itself into something that is quite remarkable not because it's a cool piece of art but because it is making a statement so hilariously "in your face" and RUDE! Oh yes "rude" as in sexually explicit and very pornographic.

Oh my God! I laughed out loud right there in the airport. People hearing me must have thought I'd gone a little mad from travel fatigue. How on earth had he got away with it? It was so sexually explicit that surely people would object?

Here's the "deconstruction" for you.

The top piece is a scrotum and erect penis.

Not just erect but piercingly penetrating.

There it sits crowning the rest of the sculpture as if claiming the ultimate greatness of males.

But wait! Upon what does this expression of male power rest? 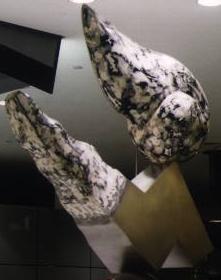 Upon that which is yet more powerful still - woman. Balanced precariously and oh so painfully on the knee of a woman telling you that not only is male power dependent on the support of women but also that our ultimate weakness is to be kneed in the balls by she who is the basis for all our power. We are powerful yes but we are at the excruciating mercy of our women.

You've heard the expression "a woman sits on a fortune"? And you know the one "worth the world"? Well think of those when you see what the woman is sitting on - a sphere. That sphere is in fact the whole world.

Below comes a cone - with the open end upward - this is the statement "that which is above is the essence of that which is below". The box below is the entire universe.

As you can imagine, once I had it in my head that I understood clearly what the sculpture was, I sought affirmation from others. I approached a number of the various shop attendants and asked them what they thought of the sculpture and what it might mean. Never even noticed it. I asked a number of fellow travelers. Nope, no idea, not interested.

Every time I passed through that lounge I'd go and look again. I'd ask travelers and airport staff. I'd even try and help people to "see" it. Nothing. Ever. Nobody was ever interested and nobody ever looked - it was just another meaningless sculpture with no purpose but to add some more glitz to a sterile place.

Well, maybe I was wrong and it had no meaning whatsoever - it's "just art" and can "mean whatever you want it to mean". Hah! No way because you know what happened next?

I turned up on one of my trips to discover that the lone sculpture had been joined by three others! Cool! 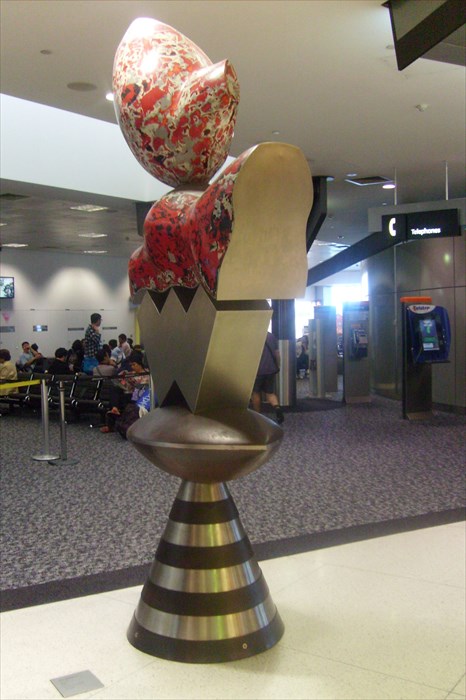 Notice that the woman is now laying face down with the man perched on her bottom. She is still resting on "the world" which instead of a sphere is the letter "W" (for "world").

I leave the other sculptures for you to discover and examine but you will see that there can be little doubt that my interpretation is correct.

It's worth a trip to Melbourne just to stand there and look at these wonderful open expressions of human sexuality standing stark amidst the hundreds of unseeing and uncaring travelers who pass them every day.

Makigawa was a clever Japanese man who wrote haiku with objects. Beautiful, simple, and there for you to find enlightenment if only you are mindful enough to see.