to me, with my now finely tuned suspicious mind, the article at:

looks like one of those propaganda publications produced as a prelude to what is now the new modern war - new war.

I looked at every single picture published on the ISIL twitter feed and it was impossible for me to assert that it was witness to  murder.

I really looked but every scene had holes in it - it was not enough evidence to allow us to say that these massacres are truth.

Remember the news reports for Iraq in the first war - the murdered incubator babies turned out to be an inhumane hoax of every worst kind.

We need more evidence than this you scum-bags and the phrasing of your headline and the facts of your story are at terribly violent odds.

Dear Tony, you child of Satan.


below - copied in full from source, this date

PHOTO: Human Rights Watch says between 160 and 190 men were executed over four days. (AFP: Welayat Salahuddin)
RELATED STORY: ISIS insurgents publish photos of alleged mass execution in Iraq
MAP: Iraq
Satellite imagery strongly suggests the extremist Sunni group the Islamic State of Iraq and Syria (ISIS) has conducted mass executions in Iraq, lobby group Human Rights Watch says.
ISIS, radical Islamists who want to re-create a mediaeval-style caliphate straddling Iraq and Syria, has stormed largely unopposed across much of northern Iraq, taking cities including Mosul and Tikrit, seizing border posts with Syria and advancing to within some 100 km of the capital Baghdad
In mid June, ISIS posted pictures on Twitter that appeared to show the massacre of 1,700 Iraqi soldiers after the fall of the city of Tikrit.
However there has been no independent verification.

ISIS militants publish images appearing to show the massacre of Iraqi servicemen in Tikrit (WARNING: Graphic images).
New York-based Human Rights Watch said that between 160 and 190 men were killed in at least two locations in and around Tikrit - the hometown of late Iraqi dictator Saddam Hussein - between June 11 and 14.
It said that the death toll could be much higher, but the difficulty of locating bodies and getting to the area had prevented a full investigation.
"The photos and satellite images from Tikrit provide strong evidence of a horrible war crime that needs further investigation," Human Rights Watch emergencies director Peter Bouckaert said in a statement.
"They and other abusive forces should know that the eyes of Iraqis and the world are watching."
It was not immediately possible to get comment from ISIS.

The United Nations said on Tuesday that at least 1,000 people, mainly civilians, had been killed and roughly the same number injured in fighting and other violence in Iraq in June as ISIS swept through the north.
Victims included a number of confirmed summary executions committed by ISIS as well as prisoners killed by retreating Iraqi forces.
HRW counted the bodies visible in the available ISIS photographs and estimated that ISIS killed between 90 and 110 men in one trench and between 35 and 40 men in the second.

Explained: What is ISIS?

International correspondent Mark Corcoran takes a look at the feared insurgent group currently poised to march on Baghdad.
A further photograph shows a large trench with between 35 and 40 prisoners shot but Human Rights Watch said it had not been able to pinpoint the site.
A UN human rights spokesman said on Tuesday that ISIS had broadcast dozens of videos showing cruel treatment, beheadings and shootings of captured soldiers, police officers and people apparently targeted because of their religion or ethnicity, including Shi'ites and minorities such as Christians.
Northern units of Iraq's million-strong army, trained and equipped by the US, largely evaporated after Sunni Islamist fighters led by the ISIS launched their assault.
In Tikrit on Friday, Iraqi army helicopters fired on a university campus in an effort to dislodge ISIL fighters, a day after launching an airborne assault on the city.

PHOTO: ISIS has stormed largely unopposed across much of northern Iraq, taking cities including Mosul and Tikrit.(Reuters: Wissm al-Okili)
Posted by The Peak Oil Poet at 00:12 0 comments

Look at this and see the end of days 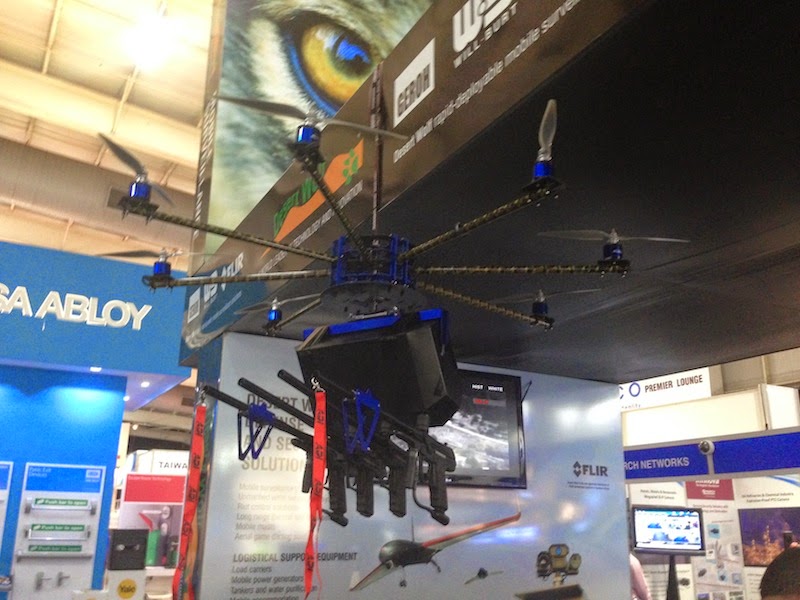 and here's where this info came from:


The Skunk is equipped with 4 high-capacity paint ball barrels releasing at up to 20 paint balls per second each, with 80 Pepper balls per second stopping any crowd in its tracks.
The current hopper capacity of 4000 balls and with a High Pressure Carbon Fiber Air system it allows for real stopping power. Bright strobe lights, blinding Lasers and with on-board speakers enables communication and warnings to the crowd.
Equipped with a FLIR Thermal camera, full HD video colour camera, on board recording, full telemetry data link and long range control link, this unit is unique.
The powerful Octa copters can also be operated in formation by a single operator. The Desert Wolf Pangolin ground control station is used for system management. What makes the Pangolin unique is the operator and his team are also under full video and audio surveillance. Every move, every decision, every command is recorded.
The lifting capability of the Skunk is 45 Kg due to the eight powerful electric motors with 16 Inch props. The operator has full control over each marker. He can select the RED paint marker and mark the protester who carries dangerous weapons, he can select the BLUE marker to mark the vandalising protestors and if needed the Pepper balls to stop the advancing crowd before they get into a "Life threatening situation"
He can also set the releasing frequency of each marker from as low as 1 ball per second up to 20 balls per second. If all markers releases at maximum rate, the you disperse 80 balls per second. This high frequency will only be used in an extreme "Life threatening situation".
The system also has a number of safety systems and features. Desert Wolf will continue to improve the design and ensure a safe and reliable product. Our aim is to assist in preventing another Marikana, we were there and it should never happen again.
Posted by The Peak Oil Poet at 00:50 0 comments