my beef with Richard Dawkins and his fundamentalist followers

originally: my beef with Dawkins et al
first let me get this straight – Dawkins has been one of my absolute heroes for some time – i bought i think all of his books – some of them multiple copies to give as gifts to people – most especially the Selfish Gene and The Ancestor’s Tale – i probably bought and gave away between 5 and 10 copies of those. Few have shown me the awesomeness of evolution as well as he has. He’s not alone – I’m your typically well-read scientist so pretty much any good book written by a scientist I’ve read – just like many of you I assume.
I’ve struggled with how to express what it is about Prof Dawkins that really gets to me – and i mean negatively. I have a copy somewhere of the “God Delusion” – i read it and thought it was pretty amateurish – it did nothing for me as i frequently felt as i read it that on the subject of God delusions he had a way to go to catch up with where i was at the time. Still, i thought it was one of a number of useful books to have at hand for those occasions when you wanted to beat some religions idiot around the head with something weighty enough to deliver a message but not so much that it would cause irreparable brain damage and land me in prison.
Since then he’s set himself some sort of life goal of destroying religion – that’s cool, not a bad thing to go down in history for having done, or at least having to contributed to. That such a notion might be a tad simplistic (akin to someone thinking they could easily dream up a way to predict the weather a month out or that they might predict the state of the worlds stock markets a year hence) is an issue but I’m not one to criticize anyone contributing to a positive end result no matter how silly it might end up being in hind-sight (a few generations from now)
no
what irks me i’ve struggled to be able to convey – to encapsulate, to find the quintessence of so that i might communicate it to others
i think most of the problem lies with that what i perceive is probably just the consequence of my fear painting ugly potentials that probably will never turn out to be how the history of the world unfolds
it’s just my imagination, i’m just looking at the dark side
so, how might i convey it?
maybe in the future i’ll have a better way, a fluid, clear, perfectly worded and thought out way to convey to others the core issue of my fears
maybe
for now the best i’ve come up with is this
imagine, Prof Dawkins (well, it looks and sounds like him), sitting on a stage as he so frequently has done, sitting across from a Jewish Theologian (though i think such a person would be some sort of senior Yeshiva Rabbi) – he is putting the case to the Jew that the whole God thing is bollocks (as it is, as we all know) and he darts eloquently in and out of various biblical excerpts to do with the nastiest side of the Good Book – like stoning people for this and that – you know the drift
the Jew is doing the best he can to defend his religion – deflecting away from those negatives to some broader picture of Judaism and to such things as the mighty contributions of Jewish peoples of the past – and of course, as Prof D is right to do, he puts those down and returns to the issues – the non-existent God that gave the land of Israel to the Hebrews and such – all those things we know to be crap in the Bible
periodically as this is going on you hear sounds from the audience you can not see
ooohs and aahs as Dawkins makes a point
some clapping as one of his points really drives the Jew to discomfort
slowly you become aware, as if a camera is panning back
of the audience
now you start to see who they are
you realize that the hundreds of people in the audience are dressed in Nazi uniforms
pop

The Richard Dawkins Foundation is a bunch of militant anti-theists who care very little for balance - that they may contribute to the the worst of what might come as a consequence of rising Islamaphobia they care not at all. If you try to point this out on their site you are called a spammer and banned.

So much for open minded debate. 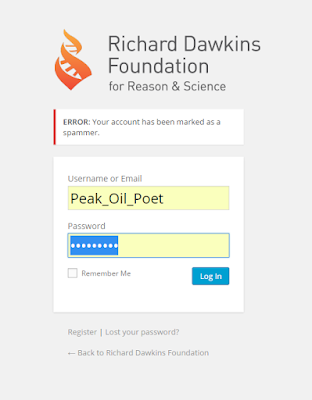 Of course they are Fairlie Good.