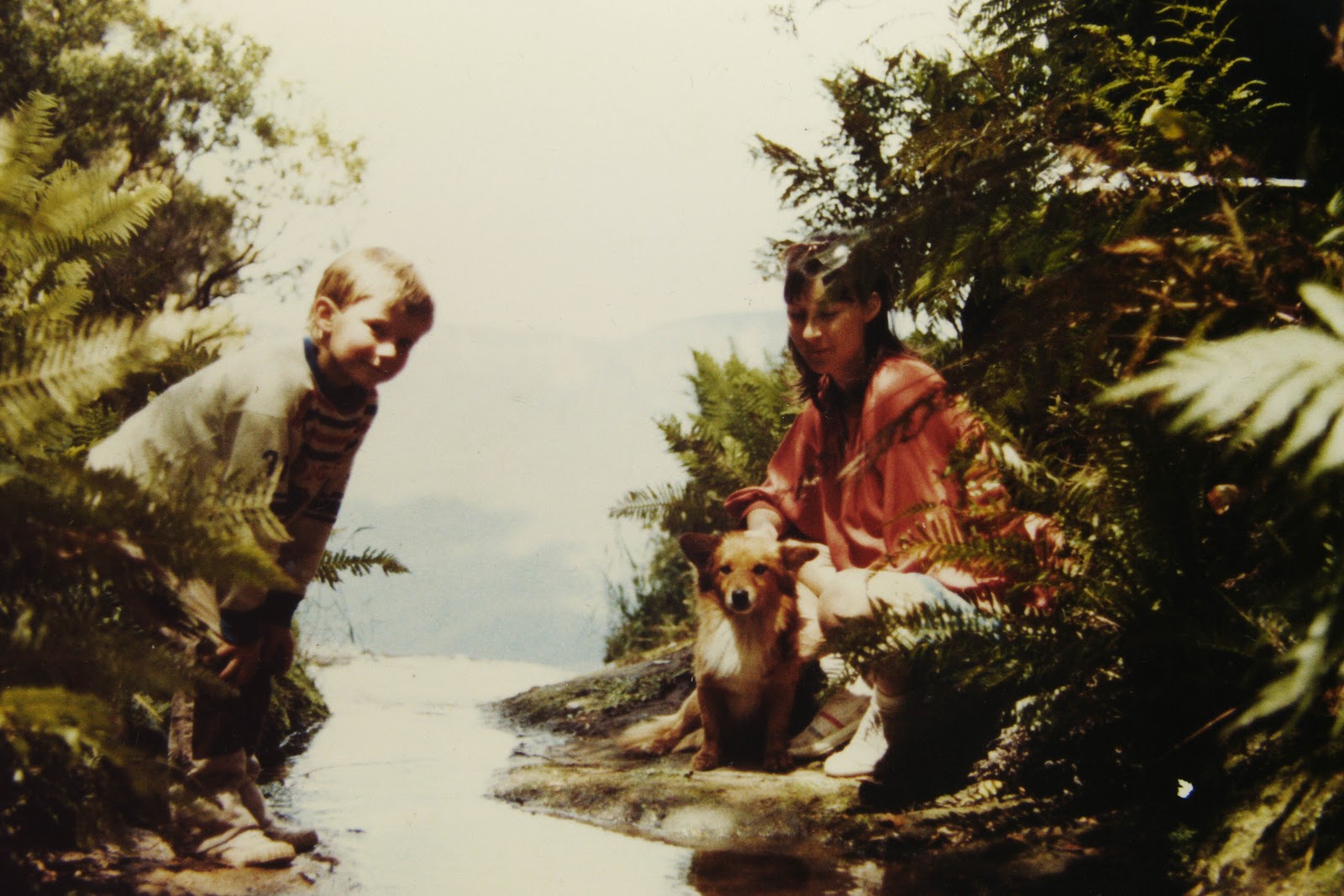 Bazil came into our lives when we lived in the Blue Mountains of New South Wales. In those days we were young and we had a young son named Aaron though we all called him Chester after Chester Burnett - a famous blues singer who's picture had hung above the crib and then the bed that Chester slept in for some years.

Margaret and I were invited to pick from the litter of a fox terrier that belonged to one of our friends. The litter was a funny mixture as can sometimes occur with dogs for there had seemingly been more than one sire. One of these was known to have been Shadow - a giant of a dog and pure-bred German Shepherd.

I can see your mind wondering how such a union might have been accomplished - and we certainly thought up a few hilarious solutions ourselves - most of which placed Sloan (the bitch) on various pieces of furniture during the act.

Anyway, I was very lucky to be first to choose for Bazil was the obvious choice - he was absolutely darling. He looked exactly like a small furry fox. When I sat at the door of the garden shed where they were whelped, he immediately came to me and i picked him up and smiled. This was the one. There was no question.

Bazil was returned to the litter so that he could be weaned at six weeks. Not long after we picked him up (with many a sigh of loss by the owner who was now aware of the uniqueness of this pup). Bazil became one of the family and Chester was elated for every boy wants and needs a dog to love.

There are so many stories i could tell you about Bazil. We were living out of a bus and travelling a lot when he was a young dog - he went everywhere with us.

In Sydney, during peak rush hour shopping we could leave him at the door of a department store and tell him to stay - and we could come back hours later and he'd still be there - he would wait and if anyone tried to pick him up he would evade them. He was a cool dog.

Once we stopped at a beach and parked for a bit before moving on. Nobody noticed he was not with us when we took off and it was late and i drove for hours before realizing he was gone.

We did not see him for a long time - many weeks until eventually someone found us through the university i had gone too.

I took a train way out of Sydney to somewhere out of Hornsby. I had to walk for miles afterwards. When i got to the house where he was and walked through the door he jumped clean off the ground higher than my head and danced around my shoulders like a crazy bird yelping as if to say "i missed you so much, i'm soo happy to see you".

The people were sad too because they were hoping that he would be happier with them because well gee, he was just a special special being.

I took him back on the train in my duffle bag because it was not allowed to have a dog on the train.

Another time we were in the mountains - we took a run along a track that ran parallel to those awesome cliffs you might have seen if you've ever been to Katoomba - hundreds of feet of sheer faces. Really amazing day. We came to a place where we had to get across a gap maybe a hundred feet deep and a few feet wide - and on the other side the ground was at least 6 feet higher than that we were standing on.

There was a small but sturdy tree there that i leapt across and grabbed. Then, holding on to the tree with one hand i swung back and whipped Margaret and Chester up beside me. Leaving Basil whimpering with worry behind on the rock.

I leaned down and crooked my arm and said "Bazil you just have to jump and let me catch you and i showed him my arm and yelled "come on Bazil".

He inched up to the edge of the cliff, looked down, took a sudden few steps back and looked up at me with a look on his face that was unmistakably the dog equivalent of "are you completely crazy? Do you honestly expect me to jump over THAT?

In a very level voice i explained to him: "Bazil, there's no other way for you to get over here - you just have to jump and trust me."

He looked at me and his face fell - it was if he was saying "bummer". He inched up to the cliff edge again and looked down. He looked up at me again with a huge "please don't make me do it".

I said "Bazil. You can do it mate. You are the best dog anyone ever had. You can do anything. Now JUMP!"

Margaret and Chester called too. "You can do it Bazil - come on boy."

And he jumped. Right into the air in reach of my arm - right over that hundred foot drop.

I dropped him down beside us and he just went berserk with excitement as if to say "see, see what i done! Aren't i just the most amazingly brave dog in the world yippy!" And we were all over him with admiration too.

What a dog. What a being. He was so much like a person. So very much it was awesome.

the cat and the sailor

Once upon a time a sailor came home from many long years at sea. he had a knarled beard and wore the scars of many close encounters. when he took up again in his old home, strange yet quietly comfortable, nestled in a sheltered cove by the sea, he discovered that a cat lived there with it's three kittens and there was an old tom too to be seen on days when he was not cataworling with the neighbouring toms, sleeping in the sun on the roof of the laundry.

The sailor was familiar with cats for there had always been one or two aboard ship. There had been a cat on his last ship who would not be tamed though he had spent many contemplative moments stroking her in the sun at the tiller.

But this cat was different for the sailor felt immediate affinity for her though she was shy to the touch and would always bound away at the moment he tried to stroke her. Nor would she let herself be caught in a room alone with him.

So they lived on for some years, the Sailor working at sails and tackle and the cat moving in and out of his life. And they learned to talk to each other. Sometimes across the old rock wall at the back of the house, sometimes in the little flower garden in the courtyard. He would talk as he'd always talked, from the heart as innocent as he was when he was a child. And she would talk to him.

Once when the sailor was deep in thought he saw the cat before him and she was waving her paw in the air. It caught his attention and for a moment he was sure the cat was actually waving to him. He saw as he cleared his thoughts that a small  butterfly was dancing tentatively before her and she was playfully pawing at it. He had not seen the butterfly at first.

Still from that day to this he called her his little wave.

A wild wind was blowing from the south one day when the sailor realised he had not seen the cat for some time. It was cold and though he left the door invitingly open to a room with a hot fire and the smell of cooking food, the cat did not venture to the door. He and the cat had in two years not shared a room but this was the wildest night he had ever known in this part of the world.

He refrained from calling to her for he felt a bit silly sometimes to think that he had become so attached to the cat. It was after all just a cat and had obviously lived here quite succesfully without him. Why need he worry?

But he did. It grew on his mind for hours and into a day and the weather grew more rough. He started looking about the house but though it be rock strong, there were not many places even for a cat to hide. He searched the roof and the old fireplace in the laundry. He looked in the small boat shed and under his upturned boat.

He looked everywhere. And then he called. At first it was quiet and self conscious "kitty" "kitty" but the was no answering wew. He became desperate for the weather was now so rough that he feared for her life.

He went back to his warm fireplace to recover from the cold numbness that he felt, and as he warmed his hands standing before the fire, contemplating where else he could look, he saw her calm and safe, snuggled in one of his old sea jackets and his heart leapt.